Today, the nation officially honors Christopher Columbus. You can believe the hype. It is true.  In 1492 he sailed the ocean blue. What’s up for debate is the semantics of discovery. Columbus’s arrival to the Americas was one of many events that led to the colonial era which also brought along with it large scale occurrences of  rape, disease, murder, and a number of other maladies in interactions with people who were already settled in the Americas. Europe’s discovery was personal. A number of nations had been chilling in the Americas for years. Columbus kind of  got lost on a boat looking for trade routes, and made good on what could have been a misfortune for Spain.  Then he made hell for other people. The only person who should love him was Queen Isabella. He does not really merit a tribute. ( Neither does misogyny nor drug dealing really, but you know: the only Christopher we acknowledge is Wallace. )

So if we’re not honoring Columbus today, we can honor the people he met in the Americas.  The Smithsonian National Museum of The American Indian (NMAI) offers a great place to start getting familiar with their history. If you can’t make it to the physical location,  you can explore a lot of what the museum offers online. Let’s be careful as we construct new commemorations.  In pushing to celebrate Indigenous People, let’s make sure we’re taking into account a well rounded view of the history of those here before us. Trust me when I say it wasn’t all peace pipe smoking, dancing with wolves, or trails of tears. The museum helps you weave through the history with a variety of historical artifacts and interactive exhibits.

Every time I go to DC, I make sincere efforts to get to the NMAI. It’s a great institution. But with the pains and insistence I often exhibit, you would think that I didn’t know about the National Museum of the American Indian-New York. Oh, I know about them alright. They quite perfectly rejected my docent application in high school. But my insistence on visiting the DC branch is not just a function of old resentment. Rather, it is the great promise of fry bread at the DC branch’s cafeteria  that pulls on my cultural heart strings. Consider this my additional endorsement. 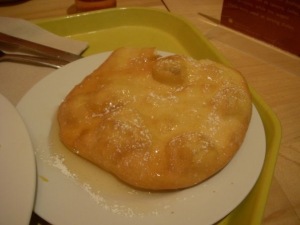 Yep, the picture is horrible, but the taste….the taste!

In my quest for fried pieces of dough, I have had the opportunity to engage with some amazing pieces of contemporary art, historical artifacts, and learn something more about the black Americans who are and are not part Cherokee.  This doesn’t even begin to take into account the wonderful environmental aspect and attention paid to creating realistic feels of various parts of the States throughout the grounds. Today as I reflect on the holiday we’re supposed to celebrate- and yearn for fry bread-I also pause to honor those that were here before us, and whose descendants are still here today.

Of course I pose with the pieces at NMAI. I need to do something to work up the fry bread appetite. (Circa 2009)

Oh and one more thing, we’re calling out Columbus, not Italian culture at large.  So there’s nothing wrong with a parade or zeppole today as well.